The bulk of the collection consists of the personal papers of Harlan Fiske Stone (1872-1946), the American jurist and Supreme Court Justice, including correspondence, writings, speeches, photographs, two newsreel films, and memorabilia; there are also numerous clippings and articles about Justice Stone's life and career. Also included in the collection are materials about H. F. Stone's brother Winthrop E. Stone; the papers of Frederick L. Stone, the father of H. F. and W. E. Stone; and the papers of H.F. Stone's nephew, David F. Stone. 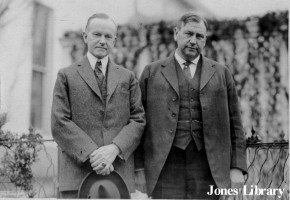 President Calvin Coolidge with his new Attorney General, Harlan Fiske Stone, just after Mr. Stone took the oath of office at the Department of Justice in Washington, 1924.

The Stone family in New England has its origins in Simon Stone, who emigrated from Bromley, England, and settled in Massachusetts in 1635.

Frederick Lauson Stone (1836-1924), was the son of Hannah T. Fiske and Lauson Stone. In 1861 he married Ann Sophia Butler (b. 1842), the daughter of Marshall Butler of Chesterfield, N.H. In 1874 they moved from their farm in Chesterfield to Amherst because of the educational opportunities available there. For twenty years they operated a farm in Mill Valley before moving to a house on Main Street. Mr. Stone served as Selectman in Amherst during the years 1884-1886 and 1889-1890, was one of the founders of the Fort River Creamery, and had many real estate interests in Amherst. Well known in Amherst as one of the old-style "cattle drovers," Frederick L. Stone was considered a local authority on cattle. Frederick L. and Ann Butler Stone had three sons: Winthrop Ellsworth, Harlan Fiske, and Lauson; and one daughter, Helen L. Stone Willard, a graduate of Mount Holyoke College in 1909 and the wife of Rev. John D. Willard.

Winthrop Ellsworth Stone (1862-1921), the first child of Frederick and Ann Butler Stone, was born in Chesterfield, N.H., and attended Amherst High School and Massachusetts Agricultural College (now the University of Massachusetts), where he received his degree in 1882. After studying chemistry and biology at Boston University for a short period, he studied chemistry at the University of Goettingen, Germany, where he received a Ph.D. in 1888. In 1889 he was appointed chair of chemistry at Purdue University in West Lafayette, Indiana. After the death of President Smart in 1900, Stone was appointed his successor. In 1907 he was awarded the honorary degree of Doctor of Laws by the University of Michigan. Winthrop E. Stone continued as President of Purdue until July 17, 1921, when he died in an accident while mountain-climbing with his wife Margaret on Mt. Eon, Alberta, Canada. Their two children were David F. and Richard Stone.

Harlan Fiske Stone, the son of Anne Butler and Frederick L. Stone, was born on October 11, 1872, in Chesterfield, N.H. He attended Massachusetts Agricultural College from 1888 to 1890 when he was expelled for pushing Charles Swan Walker, the college chaplain. He then entered Amherst College and received his degree in 1894. After teaching science in high school for one year, Stone entered Columbia Law School, where he received his degree in 1899. He opened a private practice in law and also taught at Columbia Law School for several years. He was named dean of the school in 1906 and remained there, on and off, until 1924. During this period he resigned and was reinstated several times as a result of disputes with Nicholas Murray Butler, the President of Columbia University. In 1924, President Calvin Coolidge appointed Stone Attorney General of the United States. This was a period of the Teapot Dome scandal, and President Coolidge needed someone with a national reputation for integrity to clean house in the Department of Justice. One of Stone's most significant and enduring acts was his naming of J. Edgar Hoover as the head of the Federal Bureau of Investigation.

In 1925, Stone was named Associate Justice of the Supreme Court. It was here that he helped mold the court during the years of the New Deal legislation and the "court-packing" attempts of President F. D. Roosevelt. Surprisingly, it was Roosevelt in 1941 who named the conservative Stone to the post of Chief Justice. Stone remained in this position until his death on April 22, 1946. In a recent survey of deans of American law schools, Justice Stone was ranked as one of the most important and influential jurists in American history. Harlan Fiske Stone was married to the former Agnes Harvey.

David Frederick Stone (1890-1987) was the son of Winthrop E. Stone. He graduated from Harvard College in 1912 and, except for his military service, was continually employed in the insurance field in New York City. In 1915 he enrolled in Co. K, 7th Regiment of the National Guard. This unit was federalized in November 1915 as a U.S. Army regiment and sent to the Mexican border with other forces under the command of General Pershing. Stone was discharged in 1916. In April 1918 he joined the U.S. Naval Reserve and was assigned to duty on the Atlantic seaboard. He was discharged in July 1919. David F. Stone was a resident of New Canaan, CT for 44 years.

Marshall Harvey Stone (1903-1989) was the son of Harlan Fiske Stone. He attended Harvard University (B.S. 1923; Ph.D. 1926) and had a distinguished career as an internationally known research mathematician. He was a member of the Harvard faculty from 1927 to 1946, when he was appointed chair of the department of Mathematics at the University of Chicago. In 1968 he returned to Amherst with an appointment as professor of Mathematics at the University of Massachusetts. He received a Fulbright Fellowship in 1967, the National Medal of Science in 1983, the Chancellor's Medal of the University of Massachusetts in 1974, and other awards.

The bulk of the collection consists of the personal papers of Harlan Fiske Stone (1872-1946), the American jurist and Supreme Court Justice, including correspondence, writings, speeches, photographs (both formal and candid), two newsreel films, and memorabilia; there are also numerous clippings and articles about Justice Stone's life and career. Also included in the collection are materials about H. F. Stone's brother Winthrop E. Stone, particularly relating to his career as president of Purdue University and his death in a mountain-climbing accident; the papers of Frederick L. Stone, the father of H. F. and W. E. Stone, relating to his farm in Amherst and his other local investments and activities; and the papers of David F. Stone, including records, photographs and scrapbooks relating to his military service during World War I (1915-1985); and The collection contains a small amount of material on Marshall H. Stone and Agnes H. Stone (the wife of Harlan F. Stone), as well as family photographs and genealogical information on the Stone family.

This collection is open for research.

This collection was processed by Peter Nelson in June 2000.

Harlan Fiske Stone's judicial papers are housed at the Library of Congress.

The Stone Family Papers are organized into by family members into the following series: