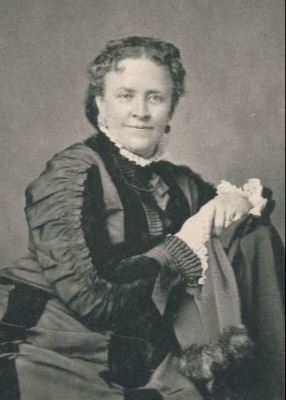 Helen Hunt Jackson was born Helen Maria Fiske in Amherst, Massachusetts on October 14, 1830. Her parents, Nathan Welby and Deborah (Vinal) Fiske, were orthodox Calvinists and Helen was raised as such. Her father was a minister who also taught Latin and Greek at Amherst College. Both of her parents were writers, and used writing to express their beliefs of predestination and Christianity. In contrast to her good friend Emily Dickinson, as a child Helen was known for her large personality and grand imagination.

In 1841, Jackson began what would become a lifetime of traveling, by going to live with family friends in Hadley, Massachusetts. Jackson’s mother suffered from tuberculosis, or consumption as it was then called. In 1843 Jackson went to live at a boarding school in Pittsfield. Deborah Fiske’s health did not improve and she died from tuberculosis in 1844. Her father was also not healthy, and died in 1846 of dysentery. At the age of 16, Helen was an orphan. Helen and her sister Annie went to live with Julius A. Palmer and his family. Mr. Palmer became the girl’s guardian, while their grandfather supported them financially.

In 1851, Helen went to live with Mr. Palmer’s brother, Reverend Ray Palmer, in Albany, New York. It was in Albany that Helen met and eventually married Edward Hunt, a civil engineer and lieutenant in the Army Corps of Engineers. They were married on October 28, 1852, a few weeks after Helen’s twenty-second birthday. In 1853, they had a son Murray. Helen was about to suffer more losses, as Murray died at age one of brain tumors. Helen and Edward conceived another child and Helen spent her pregnancy in fear. She gave birth to a second son in 1855, Warren Horsford, nicknamed Rennie. From 1857-1862, Edward was stationed in Key West, and didn’t see his family except in summers. In 1863, Edward was killed when testing a device he invented that could shoot torpedoes from submarines. In 1865, Helen and Rennie went to visit her sister Ann in West Roxbury, Massachusetts, where Rennie contracted diphtheria and died three days later. Though Helen locked herself away, she also began to write. Her first publication, titled “The Key of the Casket” (1865), was a poem for Rennie.

In the 1870’s Helen herself became sick and was instructed by a doctor to move to Colorado Springs in the hope that the climate would better agree with her. It was in Colorado Springs that Helen met William Sharpless Jackson, who would become her husband in 1875. It wasn’t long before Helen began to travel the Western United States. While traveling, Helen witnessed the poor treatment of Native Americans and took up an interest in expressing this unjust behavior to the rest of the country.

Helen’s most popular publication, Ramona, dealt with these injustices, and was based on a scene that Helen had witnessed involving a white man killing a Native American man. It was published in 1884. Helen wrote the book while dealing with her illness, which would later be revealed as cancer. She felt that was her mission to write this book, although she knew it would be her last. In 1885, Helen died in a boarding house in California.

This collection follows Helen Hunt Jackson’s life beginning when she was seven years old living in Amherst, Massachusetts through her final days in Colorado and California and into the years following her life as her writings continued to be read and cherished. Helen Hunt Jackson’s life was celebrated by Amherst, Massachusetts, and Colorado Springs, the two places that meant the most to Helen in her lifetime. The collection includes original manuscripts, poems, and letters, correspondence about publications of her works, scholarly articles, newspaper clippings, ephemera for her novel Ramona and subsequent film versions of the novel, and ephemera from centennial celebrations remembering her birth and death, and photographs and illustrations.


This collection is open for research.
(Back to top)

The collection was started in 1930 by Charles Green, the first director of the Jones Library, and continued to grow well into the 1980’s. He began by collecting letters and manuscripts written by Helen Hunt Jackson, which were donated or sold to the library by her relatives or rare book collectors. While the provenance of the items in this collection is varied, the unifying factor in almost every instance is Green as a collector. This is an active collection and new items may be added at any time.

Processed in October and November 2009 by Lea Soranno. Finding aid re-written in 2022 by Katherine Whitcomb.

Published Editions. A complete listing of editions of Jackson’s works and related publications held by the library can be found in the online catalog.

Biographical Reference. See folder: Tyler, Henry Mather: The Old Home in the Special Collections manuscript collections for a reference to the birthplace of Helen Hunt Jackson.

Articles. Articles are indexed in a card catalog in Special Collections.


The collection is organized into six series:

Series 2: Correspondence, 1837-1884
This series contains 29 letters from Helen Hunt Jackson to friends and business associates. Jackson wrote the earliest letters in the collection at age seven to a family friend. The letters are of significance as many letters written by Jackson were destroyed upon her death according to her instructions. Series 2 is arranged chronologically as far as can be determined.

Series 3: Published Works, 1876-1939
This series contains several published articles and pamphlets written by Helen Hunt Jackson which were printed during her lifetime or re-printed after her death.

Series 4: Subject Files, 1884-1985
The bulk of the collection consists of subject files relating to Helen Hunt Jackson, her life, and her literary career. Included in the subject files are articles and news clippings about Jackson, letters pertaining to the publication of her work and subsequent film adaptations, press releases and programs to celebrations commemorating her life and death, and biographical memorabilia. In particular, this series contains ephemera from the novel, Ramona, including the pen Jackson used to write the novel. Series 4 is arranged alphabetically by folder title.

Series 5: Charles Green Correspondence and Notes, 1930-1985
This series contains letters to and from Charles Green in regards to materials for the Helen Hunt Jackson Collection, and notes that he took while researching Jackson’s life. It should be noted that not every letter to or from Charles Green in the collection is contained in this series, as some of the letters are kept with the materials to which they refer.

Series 6: Photographs, circa 1850-1884
The series includes photographic prints of portraits of Jackson, of her homes in Amherst, Massachusetts and Colorado Springs, and prints of engravings of Jackson.