We encourage tour groups and classes to view the exhibits, although it is best to schedule your visit in advance.

Permanent exhibits on Emily Dickinson, Robert Frost, and Robert Francis are a featured part of the Special Collections department. 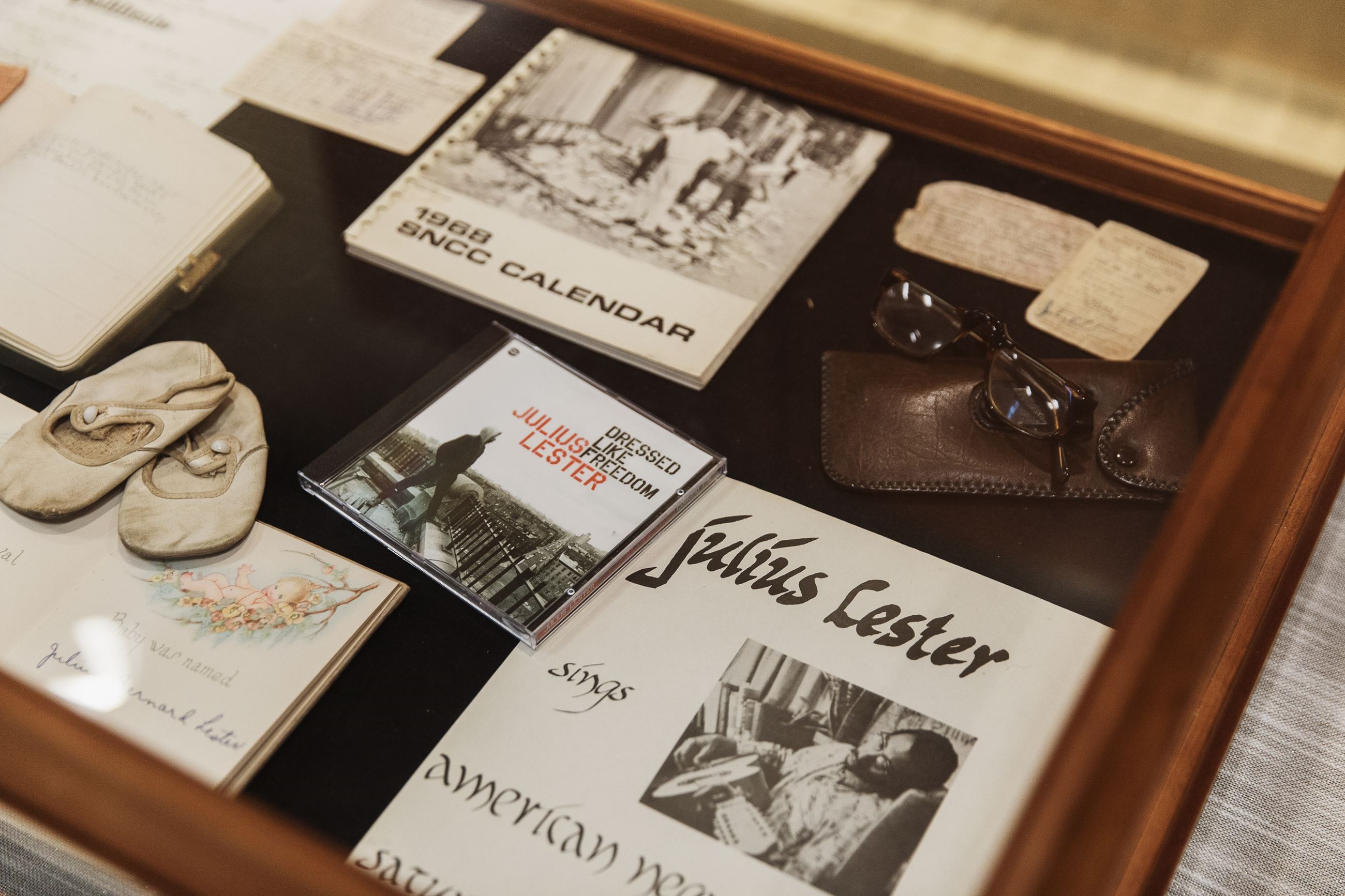 Every 2-3 months, a new exhibit is displayed in Special Collections. Rotating exhibits are also sometimes mounted in other areas of the library.

Currently on Display in Special Collections

Read All About It! 1919 in the News
Featuring articles from the Amherst Record, this exhibit contrasts national events from 1919, such as the influenza epidemic and World War I, with local news about the Amherst community.

(In the Library's Lobby)
The Amherst House Fire
This month's spotlight exhibit explores the Amherst House fire that destroyed the first home of The Jones Library in 1926.

Much of our Fine Arts Collection is on display throughout the library, including paintings, bronze sculptures, and decorative objects.

For this exhibit, we've selected writers from our Amherst Authors collection and chosen one of their books to highlight. Come explore the long history of writers in Amherst.
Samuel Minot Jones: Son of Amherst, Father of the Jones Library (April-May 2019)

Learn about the library's benefactor, Samuel Minot Jones, and his family in this exhibit curated by MLIS student Sean St. Marie.

The Art of the Bookplate (January-March 2019)
A display of woodblocks, copper plates, and prints from the Charles Green Collection featuring Amherst residents and institutions.

Successful authors and artists have always received a fair amount of admiration and, in some cases, criticism from their readers. Ordinary people write to the famous and infamous for a variety of reasons. In this exhibit, we showcase selected letters from fans and critics who felt compelled to write to a few of our own Amherst notables.

Our latest exhibit, Wonder Women of Amherst, doesn’t pull any punches when it comes to featuring 6 local women who lived their lives leaps and bounds ahead of their time. Like Wonder Woman, our women fought stereotypes, showed that the extraordinary is often found in the ordinary, and that adversity was no match for their “super” powers. Come learn their origin stories and how combating their obstacles made an impact in our community.
An Olio of Expression: Finding Art in the Ordinary (December 2017-January 2018)
This exhibit displays a miscellany of items from the collection that allow visitors to ponder the many kinds of art that exist all around us.

Greetings from Amherst! The Edgar Scott Picture Postcard Collection (April-May 2017)
An exhibit featuring views of Amherst by Edgar Scott, including several hand-colored postcards. Learn about Edgar Scott and photograph editing before the use of Photoshop or computers.

An exhibit about Native American author and activist, Charles Eastman, examining the importance of personal narratives in the telling of history. Designed by Hampshire College student Onea Engel-Bradley.

For my friend W.R. Brown: Robert Frost's best friendship in Amherst (or anywhere) (September-October 2016)
"For my friend W. R. Brown” starts one inscription from Robert Frost in a 1923 copy of his book New Hampshire. This is just one of the notes between poet Robert Frost and Warren R. Brown, an Amherst businessman and writer, over their many years as friends that are currently on display. This exhibit focuses on one of Frost’s “best friends in Amherst (or anywhere)” and features letters, Christmas cards, and books recently donated by the Brown family.
Ruth Payne Burgess: Sketches of her Life (July-August 2016)
Learn about the life of artist Ruth Payne Burgess. Now online on Digital Amherst

In the Catskills (May-June 2016)
A Photographic Journey through the Catskills with John Burroughs and Clifton Johnson. Now online on Digital Amherst

Who is David Grayson? (March-April 2016)
Grayson wrote popular essays about his simple farm life. For years no one knew who was behind the pseudonym. One hundred years ago his identity was revealed. This exhibit showcases that moment in history with fan letters, newspaper articles, photographs, and books. Now online on Digital Amherst

Highways & Byways of the South: Photographs by Clifton Johnson (Displayed in Reference)
A writer, illustrator, and photographer from Hadley, Clifton Johnson traveled to the American South between 1901 and 1902 to capture images and stories as part of his Highways & Byways series. The photographs on display are selections from those he took during his travels and give the viewer an intimate glimpse into the difficult conditions that poor black Southerners faced alongside the familiar connections of children and family life.